Do you have a favourite saint? Some are very popular. In our parish, Saint Patrick’s, the patron saint of Ireland is very popular. He is seen as encompassing everything that is Irish and his feast day is a cause for celebration for almost the whole month of March. Irish folk the world over take him very seriously. Saint Andrew, our Scottish patron, does not attract the same devotion. I wonder why? Is it because the Catholic population of Scotland leans heavily on the Irish immigration of the last two hundred years and saints are a very Catholic thing?

Saint Anthony is another great favourite and he even has his own collection box in our parish, money for the poor usually as a result of his helping us find lost items. I can confide that he makes a good income from our household, usually concerning lost earrings or keys. He is another saint with worldwide following. Many years ago I visited his tomb in Padua. The tomb is plastered with photographs of those who have benefited from his intercession and notes of thanks.

Patron saints are puzzling. Ireland has chosen Saint Patrick who was not Irish rather than some other, Irish saint. Scotland has Saint Andrew, not Scottish and never came her in his lifetime. England has Saint George of dragon fame who never had anything to do with England. Countries in the Americas tend to have Our Blessed Mother in one or other of her appearances as a patron. Our Lady of Guadeloupe is particularly popular in Latin American places. I imagine that countries adopt a patron as a guardian. I wouldn’t be surprised if the patrons resigned in protest at the behaviour of some of the countries. I suppose we will never know.

It is in the Catholic tradition to adopt a saint’s name as our Christian name. We also adopt a saint’s name at confirmation. This seems like a wise move. Choosing an influential saint as a personal patron can have beneficial effects. Having Saint Joseph as my saint makes me feel that I have an influential intercessor working on my behalf. I have been reliably informed by some in the missions that when in a difficult situation they have prayed to Saint Joseph and their problem has been quickly resolved. Of course you don’t need to be named Joseph to get his powerful help but I still harbour a hope that it counts for something.

This brings me to the question, who are the saints? There are saints the Church has formally recognised by canonisation, some from long ago we are not too sure of (Saint Christopher for example) and there are people we know who lived very good lives and we have no doubt they are in Heaven. In the early church Christians were often referred to as the saints. Since we have adopted Christ’s teaching and follow his commands we expect to get into Heaven too. Relying on God’s infinite mercy, we can rightfully think of ourselves as the saints.

To be canonised and formally declared a saint we have to meet conditions laid down by the Church. We could be martyred for our faith and I’m sure there are many who have been murdered by extremists in the Middle East recently who qualify on those grounds. Alternatively you could live a life of ‘heroic’ virtue demonstrating Christian virtues. Both of these categories depend largely on documentary evidence and proof of miracles. The lack of documentary evidence is the main reason why some older saints are now thought to be doubtful.

There is also a process whereby the Pope can declare a person to be a saint, bypassing the usual procedures because he is sure they are in heaven as a result of a very holy life. Two recent examples of this are when Pope Benedict declared Hildegard of Bingen a saint, as did Pope Francis with Peter Faber.

The Holy Father has just introduced a third category for canonisation. This category is for those who heroically give up their lives for others through Christian charity. They must freely give their life to save others. There must be the practice of Christian charity to the point of death and there must be signs of sanctity after death and the need for a miracle as a result of their intercession. One example of such a case is that of Fr. Mychal Judge, a Franciscan friar and New York Fire Department chaplain who rushed to the scene of the twin towers following the 9/11 attacks, and was the first recorded death that day.

The thing I find curious about the saints is the things we ask them to intercede for us about. Take Saint Anthony of Padua. As I mentioned earlier we are often praying to him for help in finding lost items. In his life Saint Anthony was known as a great preacher, spreading the word of God. There is no mention of him finding things. Now I wouldn’t want to put anyone off asking his help in finding things as I continue to do that myself. However, it does distract us from what he did in his life. He was a great preacher and surely that is his great example to us.

Saint Patrick was a great missionary, bringing the Faith to the pagans of Ireland. He was not renowned as a carouser as we might expect from the Saint Patrick ’s Day celebrations. His love for Ireland was a love for the people whose souls he set out to save. As a final example I can tell you about my wife’s prayers to Saint Rita. Whenever we arrive at a car park that is obviously full she has a quick word to Saint Rita and within a couple of minutes we find a space.

Last year we visited Saint Rita’s shrine where we learned about her work with the dying. We saw the little chapel at the top of the hill in a place where she went to pray. There was no mention of cars or parking in her life although there was a large car park with plenty of spaces.

It seems to me that praying to the saints to intercede for us when we have a problem is a good thing. However I think we should find out more about the lives they lived and the works they accomplished to really understand why they are saints. Their lives should be an example to us that we can use to make our own lives more pleasing to God. Finding out more about them will take us beyond the wee plaster statues with beatific faces and help us to see people who lived in our world; faced difficulties just like us and managed to make their way to Heaven.

They can put our difficulties and concerns into perspective and show us how to live a holy life in the real world. We should not be waiting until we get to Heaven to start a saintly life. It might be too late then. We are the saints and we are challenged to make our normal lives saintly. Just like the real saints, not the plaster statues, we can follow Christ’s teaching as our guide to daily life.

I’ve just realised that means I’ll have to stop being grumpy around the house. This is not going to be easy.

Do you gave a favourite saint? Perhaps your patron has special interests? This month I have a look at the saints and why we like them. My column is published this weekend in the Scottish Catholic Observer. Get your copy before they run out.

If you are too late the full text will be here next week.

I was working today. I had a class at Glasgow University in the morning and another in the afternoon. It’s a hard life!

I had a two hour break in between and had a wander out to look at the buildings in one of the drier spells (less wet to be more accurate). Looking at the south face of the old buildings I noticed something strange. 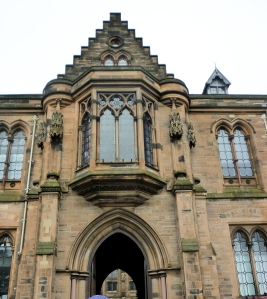 Do you see what I can’t see?

I noticed that there were spaces for statues. You can see the places where they should be on either side of the main window here. There are about two dozen spaces on the south face of the building and more in the quadrangles inside. There are no statues.

I wondered which statues were supposed to be there. If it was a cathedral then I would expect saints, but a university? Glasgow University was founded by a Papal Bull so there are religious connections but these buildings are definitely post reformation so – Saints? – probably not!

Was it intended to have statues of scholars or great Scottish heroes? Who were these missing celebrities? Why were they never put in place? It cretainly looks as though there were never any statues in place.

I was puzzled but I had to move on; another class awaited. However, there must be someone out there who knows something about the ‘missing’. It’s time the truth was told. In the words of the great Ali McCoist, “We want to know the names of these people.”