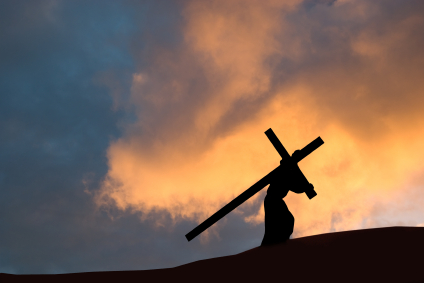 This month I’m looking at the Way of the Cross, the second station in fact. The second station simply states “Jesus takes up His cross”. That sounds clear and simple, what more is there to say about it? I decided to look back at the gospels to see what exactly they say about it. Here’s what I found.

And when they had finished making fun of Him, they took off the cloak and dressed him in his own clothes and led him away to crucify him. On their way out, they came across a man from Cyrene, Simon by name, and enlisted him to carry his cross.

They led him out to crucify him. They enlisted a passer-by, Simon of Cyrene, father of Alexander and Rufus, who was coming in from the country, to carry his cross.

Luke only says this;

As they were leading him away they seized on a man, Simon of Cyrene, who was coming in from the country, and made him shoulder the cross and carry it behind Jesus.

John has more to say:

They then took charge of Jesus, and carrying his own cross he went out of the city to the place of the skull or, as it was called in Hebrew, Golgotha, where they crucified him with two others, one on either side with Jesus in the middle.

The first three evangelists tell us about Simon being enlisted to carry the cross. Matthew and Mark don’t mention Jesus doing the carrying. Luke tells us that Simon shouldered the cross and carried it behind Jesus. That could mean Jesus was carrying the cross and Simon was assisting him with the rear of the cross.

John tells us a different story. He tells us clearly that Jesus was “carrying his own cross” and makes no mention of Simon. Now none of these accounts go into great detail but John is clearly making a point. Why is there a difference? The first three gospels are the synoptic gospels, they try to relate what happened when Jesus came among us; they tell the story. John’s gospel is different. He is telling us what it all means.

Now Matthew, Mark and Luke are telling us something about this journey to Golgotha. They are telling us that the cross is a very heavy burden. It is so heavy that they are afraid to leave Jesus to carry it alone. He is weakened after the beating and scourging he has experienced at their hands. They are afraid he might die on the way.

Now I had to stop and think about that. Why would the authorities be bothered if Jesus collapsed and died on the way? Surely they wanted to kill him? No, there was more to it than that. The authorities wanted Jesus to die a humiliating death. They wanted to kill, not only the man, but his message as well. For that he had to die a common criminal’s death in a public execution and his body to hang on the cross outside the city for everyone to see.

Every passer-by would look on the body and consider what their fate would be if they preached the same message. The crucifixion would put an end to Jesus and send a message to his followers. If they could do that to Jesus what would they do to his followers?

John makes no mention of Simon. He tells us that ‘they took charge of Jesus’ and that Jesus carried his own cross. If we consider something Jesus said earlier;

Then Jesus said to his disciples, “If anyone wants to be a follower of mine, let him renounce himself and take up his cross and follow me. For anyone who wants to save his life will lose it; but anyone who loses his life for my sake will find it.

If we take up our cross then we will be living the life God wants for us. That may be as a priest, a religious or, just as importantly, as an ordinary, everyday Christian. There are far more ordinary Christians than there are Bishops and priests. It stands to reason that we are the ones who can bring Christ’s message to the world we live and work in.

When I started thinking about this station I said the message was clear and simple. What else was there to say? Now I see that this station is one of the most important ones of the whole series. Here we are being told that our journey through life is not some meaningless existence, biding our time ‘till we die. We are on a journey of faith. Our lives, however obscure we think we are, have a purpose given by God. So, how can I take up my cross? What must I do to give my life to God?

There’s no point in waiting for instructions to come in the post (no criticism of a privatised Post Office intended) or finding a burning bush in the garden. If I want to know what God wants of me then I will find the answer in prayer and in awareness of those around me.

Prayer involves listening out for that voice inside. I recognise that voice; it’s the one I sometimes try to pretend is not there. It prompts me do things I’m afraid of or feel uncomfortable about. It’s the voice that quietly leads me where God wants me to be. Probably somewhere I don’t want go. The big test is being able to forget what I want to do and go where God leads. That is taking up my cross.

Lent is on its way. That will be time for me to take stock of myself and see what repairs I need to make in my life. Every pilgrim on his or her journey has to stop from time to time. Check the map. Are we on the right road? On my Camino walk last year I was happily wandering down through a village when an old man stopped me. He pointed out that I had missed the turn off the main road to follow the Camino down a farm track. He put me back on the road. The line of pilgrims who were following me (foolishly thinking I knew where I was going) were also able to get back on track.

This Lent I might get back on track, take up my cross again and follow Jesus. I hope I’m not alone.