Jesus is Stripped of His Garments 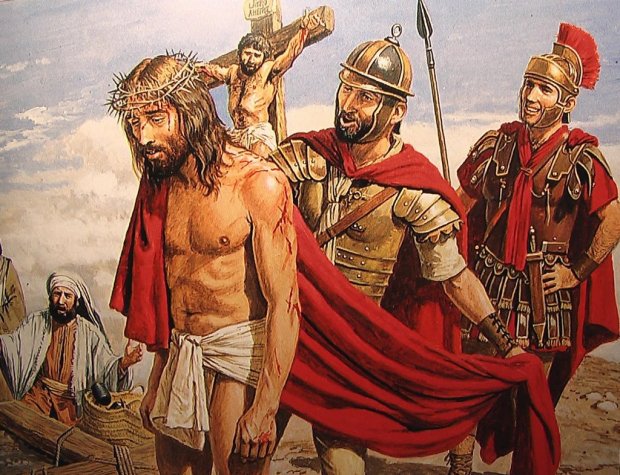 Jesus is Stripped of His Garments

The tenth station on the Way of the Cross concerns Jesus being stripped of his garments before he is crucified. Considering the treatment Jesus experiences on this journey, this might seem to be almost trivial in comparison. In our society people go off to Spanish beaches and strip at will. What is the significance of this station?

Obviously Jewish society in Jesus’ time would not have shared our permissive attitudes. To strip someone in public would be to shame them, to remove their dignity. I suspect most of us would feel the same despite the permissive society we live in. Clothes are very important to people. Your clothes don’t just guard your modesty; they make a statement about you.

Your clothes can say something about your status in society. Their messages can be confusing at times. We had a conversation about a dress code for Eucharistic ministers at a recent Parish Committee meeting. Is it permissible to wear jeans on the altar? I noted that my ‘respectable’ trousers from the outlet shop cost much less than the expensive jeans worn by many young (and not so young) people. Who is being more respectful?

Keeping up with fashion can be tricky and I suppose I’ve just given up on that one. Clothing can also tell about what we do. Uniforms identify nurses, firemen, the police and other groups who command our respect. We can choose our clothes to put on appearances, to create the right impression and, perhaps, disguise who we really are. Clothes don’t just fool other people about who we are. If we choose the right clothes we can feel better about ourselves. We like to pretend we are somebody special.

When the soldiers stripped Jesus they thought they were stripping him of his dignity. They took his clothes and even drew lots to see who would get his seamless garment. They thought they could win this ‘treasure’. In fact their attention was on a piece of cloth while the real treasure was being nailed to the cross. How easily our attention can be taken by the clothes and we miss the real person inside them.

In the Nazi concentration camps of the second world war the victims were stripped of their clothes and their dignity before they were gassed. The guards collected their clothes and meagre belongings as a fundraising exercise. They valued the belongings but not the human beings. My clothes can hide the real me. Perhaps they hide the real me from me as well as everyone else. Perhaps I’m not too keen on looking at the real me. What am I trying to hide? I suppose I’m not terribly impressed by the real me.

Without my clothes to create a good impression I’m just an ordinary human being with no status and no special properties. Worse than that; I’m an imperfect human being. When Adam and Eve lunched on the forbidden fruit they discovered their nakedness and were ashamed. They donned some makeshift clothes to hide themselves and hide their sinfulness. We have been doing the same ever since. We don’t want to admit that we are only sinners. We are ashamed of that.

When Jesus was stripped of his garments he showed us his humanness. He was a human being with a body just like ours and he was God. By adopting our humanity he showed us that our dignity does not come from our clothes or the worldly status the clothes proclaim. Our dignity comes from being human; from being created by God. Not only are we created by God but God sent his Son to be sacrificed for us. We are created in God’s image. What greater dignity could we hope to have?

We tend to think of ourselves as being nice people. I had a woman at the door a year or so back with a bible tract that declared that Jesus would return to deal with the wicked people. She asked me when this would happen. She was a bit disturbed when I said that I hoped it would not be for quite a while. “Why don’t you want Jesus to come and deal with the wicked?” she asked me. I told her I needed some time to sort myself out or he would be dealing with me.

She insisted that I was wrong. Jesus was coming to deal with the wicked, not people like us. She wasn’t too pleased when I hinted that we might think we are ok but others might have another opinion and I would need some time to improve. She went away but I don’t think she understood my point. There are none of us so good that we can presume that Jesus won’t be coming to deal with us.

When we can admit to ourselves that we are sinners we can start to get things into perspective. Try as we might we do not have the power to make ourselves perfect. Only God has that power and I for one am relying on his infinite mercy for my salvation. The whole point of the crucifixion and Jesus’ suffering on the Way of the Cross was to save us; all of us. He did not come to condemn anyone. Jesus is ready to forgive our sins. He is ready to forgive all our sins, no matter how terrible we might think they are.

He will forgive the greatest sinners. Who is the worst person who has ever lived? Is it Hitler? Is it Stalin? Try to imagine the greatest sinner and now try to imagine how anyone could be so forgiving as to forgive that terrible person. Well Jesus can do that. I’m trying to imagine what it would be like to die and go to Heaven. Who would you meet there? I would imagine meeting the great saints and the martyrs. Perhaps I would come face to face with Adolph Hitler. How could that be?

If the greatest of sinners looks at themself and admits what they have done and asks for forgiveness with true contrition then Jesus will forgive them. That’s the message in Jesus being stripped of his garments. We must strip away all the trappings of status and grandeur we like to clothe ourselves in and face the real person we are. I need to acknowledge my sinful nature and admit that’s who I really am. Then I can ask God for forgiveness and by his mercy be forgiven.

I don’t really need fancy clothes to impress people. If other people can’t see beyond the cloth and recognise me as a person, then that’s their problem. After all, the God who created the universe can see who I am despite my numerous failings he sent his only son to save me.

If you ever have one of those days when you feel worthless, then just remember God sees you differently.

2 thoughts on “Jesus is Stripped of his Garments – Full Text”